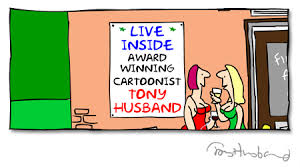 Tony was the cartoonist for Private Eye, one of the world’s great satirical magazines, for whom he produced YOBS, a cartoon strip depicting the British way of life, winning the Pont Award. As well as producing cartoons for The Times, The Spectator, Punch, Playboy, The Sunday Express and The Sun, Tony co-devised and edited Oink!, a popular children’s comic. This resulted in a TV spin off called Round the Bend. For the theatre he co-wrote the play Save the Human and regularly performs with poet Ian Macmillan with their show A Cartoon History of Here.

In addition he has published more than fifty books. His latest Take Care Son tells of his fathers decline into dementia and is receiving critical acclaim.

Tony will look at the role of humour in our lives and how we can use it to deal with even our most challenging situations. You will also get the chance to draw a bit and be funny.

If we are really nice to him, Tony will document the things that happen throughout the three days and nights at Summer School, which by the way, are 28th, 29th and 30th May. Don’t leave it too late. Book here http://bit.ly/1C3R1mu