Darling I sold the house. We’re making a one minute film! 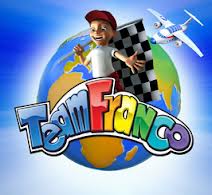 Marina Nicholas came over to me one day when I was having coffee at my local cafe. She excitedly showed me a hand written story she had made for her son Bruno, who loved racing cars. I said it was very good.

The next time I saw her she had sold her house and used the money to create one minute of animation based on her character ‘Franco’ who is a racing driver. She’d taken it to The Cannes Film Festival won a prize and has now signed up 38 countries for the series. This despite having no experience whatsoever in the media industry.

I should have been surprised. I wasn’t. Years before doctor after doctor had told Marina that she couldn’t conceive. She experimented with every possible technique and every possible variable until after seven years Bruno was born. She put her research into a book which was published in 16 languages and hundreds of other kids were born.How does she do these things? Come and find out. She’s just one of the amazing people that will be part of the faculty at The School of Curiosity ‘End of Summer School’. You can find the full prospectus here.

You should come. You never know where it may take you when you open up the door of curiosity.