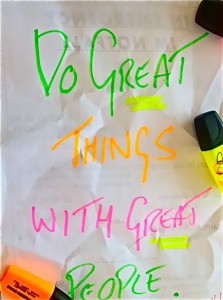 Thirteen years ago Malcolm McClean, Founder of the School of Curiosity, had fallen out of love with his work. He wanted to do something else but he wasn’t sure what it was. When his wife announced that she had fallen out of love with him too, he found himself without a job; seperate from his children; without a home; and with a substantial divorce settlement to find. So he did what anyone would do…he went to live in a beat up old caravan in a farmers field in the midst of a freezing English winter.

Laying down a blank sheet of paper on the caravan table, he resolved that when he knew what he wanted to do with his life he would write it down. Eventually after some months and a couple of pints of strong lager, it came to him. He wrote it down and then said it out loud to see how it felt “Do great things with great people”. He liked it. That became his business plan, and it still is.

You can find out more at The School of Curiosity ‘End of Summer School’ Villefranche-sur-Mer 23-25 October, because he’ll be there…just doing great things with great people. You can download the full prospectus here.

Meanwhile, here’s a bit more about the ‘Gaffer’ (He did a few other things before The School of Curiosity)…

There was something in the air that night….there must have been. At the turn of the Millennium, Malcolm McClean woke up in a battered old caravan in a farmer’s field and realised he had walked away from a successful business, was facing an expensive divorce and had no clear plan for the future…..

Laying out a blank sheet of paper on the caravan table, he resolved that when he knew what he was going to do with his life, he would write it down. In time the answer came and he wrote it in big letters. To see how it felt he read it aloud “Do great things with great people”. He liked it and decided that a children’s book would be a good place to look for the clues to how he should do this.

Some felt he had taken leave of his senses. He says “The idea that a business could be founded on the principles of a children’s story seemed bizarre and walking away from a successful business and the status that went with it convinced many that something was amiss”.

Yet Bearhunt continues to be a remarkable success and a breath of fresh air in a world of corporate catchphrases and management mumbo-jumbo. Of course it’s more than just a few principles from a children’s story. In 2005 Malcolm set down the principles in Bear Hunt – Earn your living by doing what you love, published by Capstone, which has since been translated into Chinese; Turkish; Romanian; Korean; and a special version has been created for the Indian market. He says “You would expect me to say this, but these principles really work – whenever I get stuck or distracted I get a coffee and re-read Bear Hunt myself as a reminder to keep on doing what I’ve been doing. Ever since that momentous decision to do great things with great people, I’ve been able to do something that we all should aspire to – earn my living just by doing what I love”.

Since then he’s founded The It’s a Goal! Foundation www.itsagoal.org.uk; The School of Curiosity; written three other books and become a Sunday Times Best Selling author. Right now he is working on a novel ‘The art of being one’ in Villefranche-sur-Mer.

Maybe there’s something in this idea of ‘Doing great things with great people”.

Do Great Things with Great People is not only a business plan, it’s an epiphany and a compelling force …